The infrastructure in a community is one of the most imperative services that a municipality must deliver.

Public infrastructure is composed of bridges, roads, water supply, sewer, culverts, etc. These components are essential to sustain and enhance the societal living conditions in a community.

The City of Flin Flon will focus its efforts over the next four years to deliver an asset management plan that will identify how the municipality will ensure the sustainability and renewal of city infrastructure.

As we move through the world of technology, it's crucial that we utilize and align our systems with smart technologies. Utilizing smarter technologies will empower the City of Flin Flon to ensure that they are providing the best services to meet the needs of the residents of the community. This will also allow the City of Flin Flon to leverage the knowledge and expertise to allow for collaboration and support with surrounding communities.

1.    Ensuring that the municipal landfill is sustainable and meets the requirements of our residents.

2.    To become the hub for the provision of highly qualified and technical expertise for waste and water treatment services to the surrounding areas.

3.    The development of city-wide high-speed Wi-Fi.

4.    The development of an asset management plan.

How Far Have We Come?

During the detour at 3rd Ave & Ross St. this past summer, upgrades were done to both the Heating Plant and the Reservoir on Sipple Hill. Additionally, valve control was re-built inside the Heating Plant, replacing a deteriorating valve pit originally built under Ross St.

These projects were part of a multi-million dollar infrastructure upgrade and were part of the City of Flin Flon’s capital improvement projects for 2019.  Funding for this project was secured through a tri-party agreement between the City of Flin Flon, the Province of Manitoba and the Government of Canada.  Approximately $4 Million dollars was spent on these upgrades, equally divided among all three levels of government. The upgrade was deemed necessary due to ageing infrastructure, deterioration, unsafe conditions and unreliable service.  The original piped system was constructed in 1932.

The Reservoir on Sipple Hill has been leaking since it was built, due to unreliable concrete supply during construction at the time. This reservoir has now been upgraded to a high structural and leakage integrity, it also has better insulating value new piping, valving and a new look. 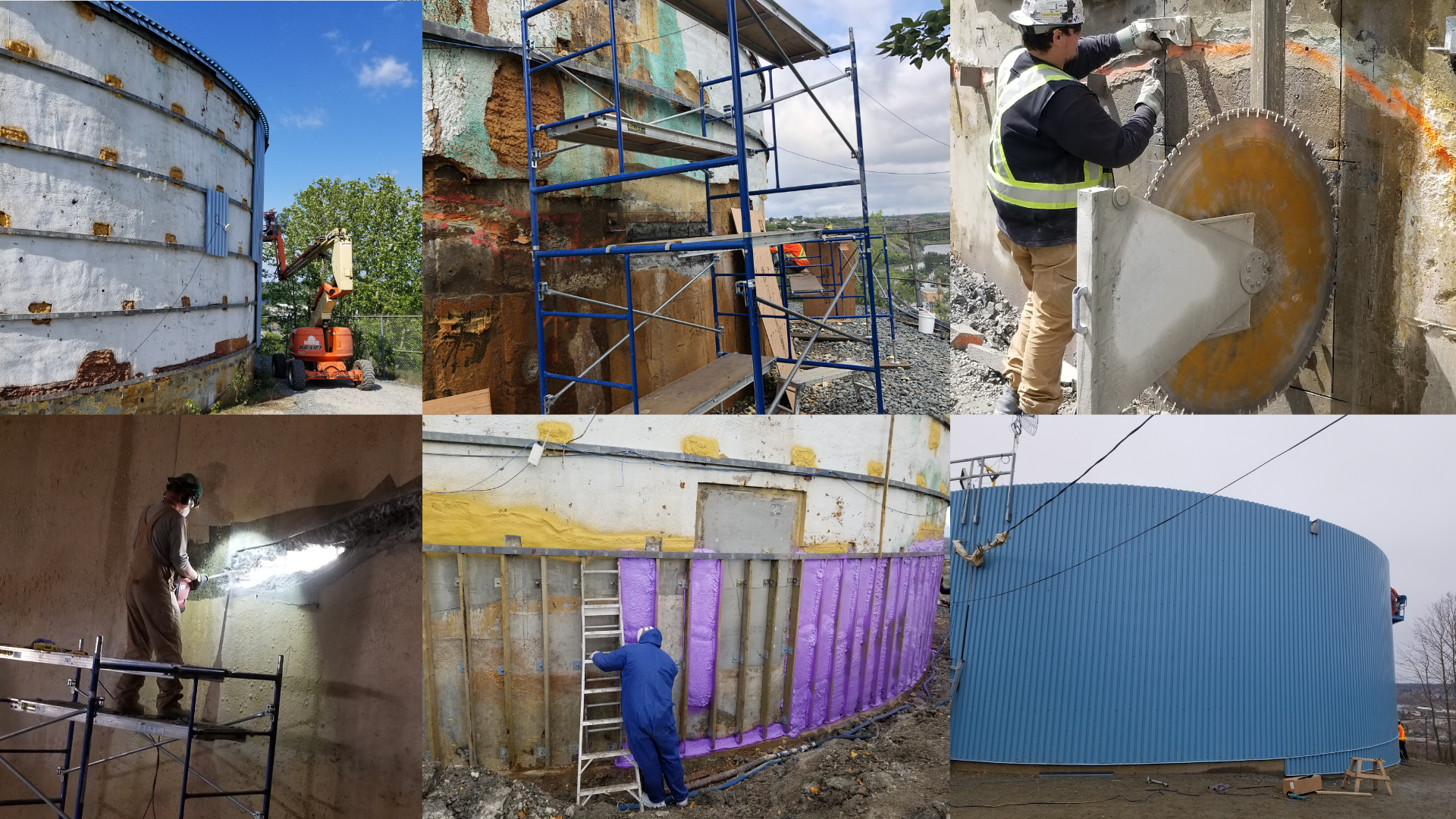 Constructed around 1950 The heating plant (HP1) and valve vault were in need of upgrades.  All valve controls have been rebuilt inside HP1 along with all new piping, valves, controls, motors, pumps, boilers and heat exchangers. This plant is now fully re-equipped with new automated systems, all built within the existing building to control costs.  Additionally, HP1 is equipped with a backup genset, designed to keep the plant running and therefore keep the water moving and protected from freezing, to further ensure a reliable service to the entire downtown area. 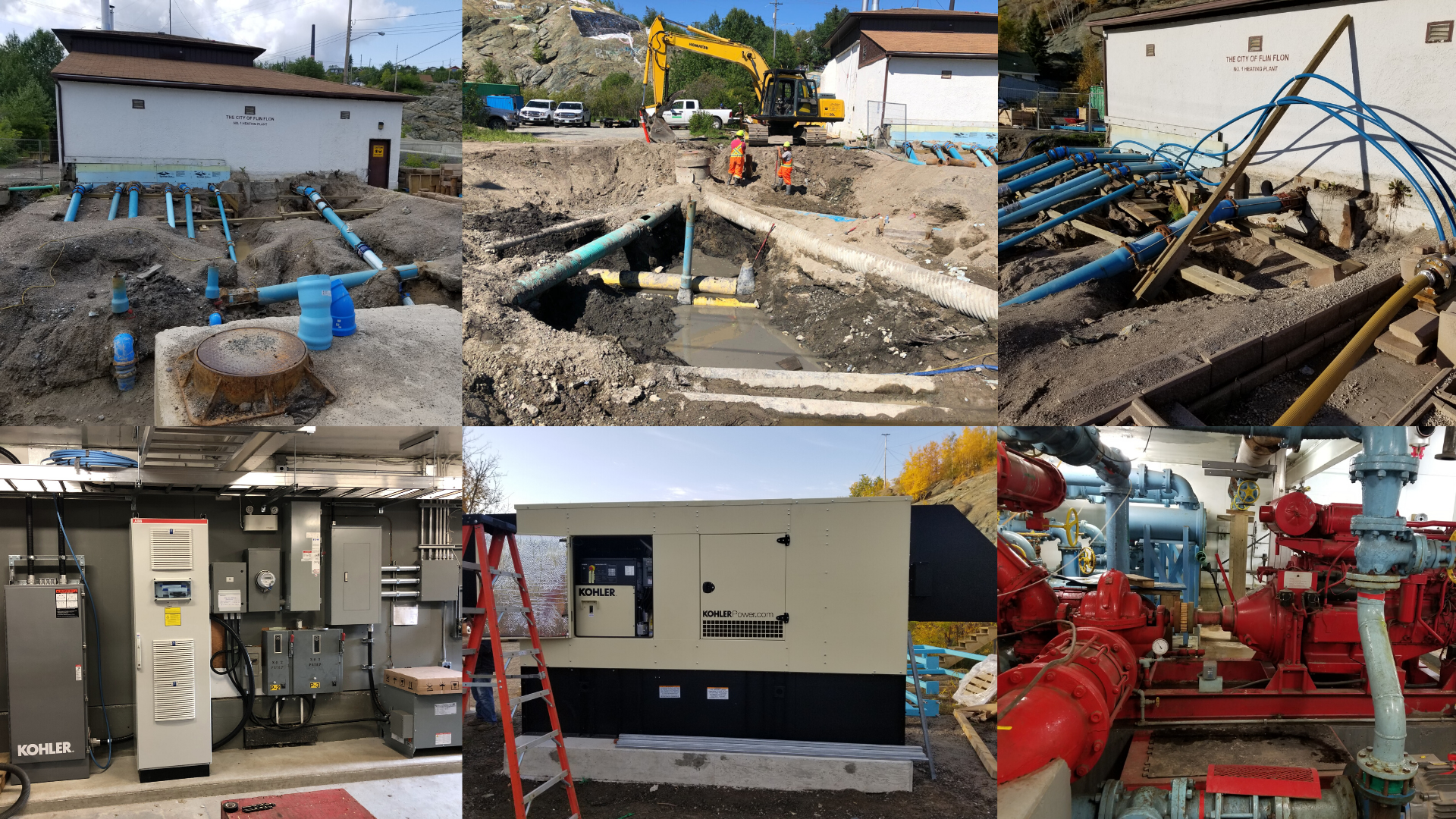 Bell MTS has recently introduced an all-fibre broadband network to Flin Flon introducing next generation internet speeds to the community. Shaw Communications has also expanded its services in Flin Flon by introducing its own internet solutions.